Akoya Pearls Oyster
Akoya pearls actually derive their name from the Akoya oyster. The scientific name for Akoya oysters is Pinctada Fucata. Today, most oysters are bred in hatcheries. At about 20 days old, the oyster larvae become spat and cling to stationary objects. The spat are transferred to a nursery till they reach six months of age. During these developmental times, the pearl farmers also raise plankton to nourish these baby oysters. At the age of six months, the oysters are moved from their nursery to specialized baskets where they are tended to as they mature over the next 18 to 30 months. At the age of two to three years, the oyster is ready to be nucleated.

Akoya Pearls Growth
After nucleation, the Akoya oyster is carefully tended to over the next eight to 24 months. The oyster produces the best nacre in water temperatures between 59 and 68 degrees Fahrenheit. Colder water allows for slower, tighter and more lustrous nacre formation. The oceans around Japan is colder so, most Japanese Akoya tends to grow slowly for 12 to 24 months. In China, waters tend to be warmer, so the nacre forms faster. As a result, the Akoya tend to be harvested faster as well.

Harvesting Akoya
Akoya is best harvested during the cold winter months. After harvesting and cleaning, the pearls are ready to be processed. Each farm tends to specialize in one specific size range. In addition, the post processing procedures require massive investments of infrastructure. As a result, most processors have direct contracts with several farms.

Pearls Nucleation
Prior to nucleation, the individual oyster’s metabolism is slowed to a hibernation state. This takes about three months. The oyster is then nucleated by a skilled and specially trained technician. A specially made bead and piece of donor mantle tissue is carefully inserted into the oyster's gonad. This incision is very small and this surgical procedure is very delicate. The best beads for nucleation made from American freshwater mussels. 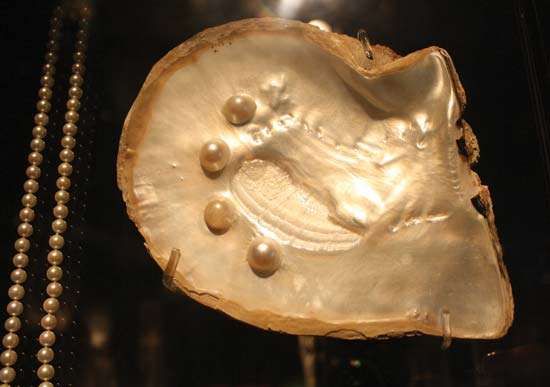 
Processing Akoya
Careful processing of Akoya can take between two weeks to six months. Akoya are carefully processed to bring out their natural beauty. The processing should not damage the pearl. The Japanese have had nearly a century of processing experience which has resulted in many patented and secret techniques. The Chinese are relatively new to Akoya culturing, starting about the late 1980's. The culturing, processing and environmental factors allow for faster growth and processing. Black and darker-colored Akoya processes also occur at this time.